Madiba, the Gandhi of Our Times 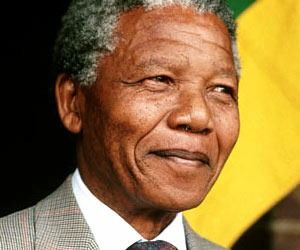 Madiba, as the great man Nelson Mandela is known to his people, is in critical condition, at 94 he is struggling for life at a Pretoria hospital. Mandela, the first black President of South Africa, was visited by President Obama (first black President of the US) earlier this week – a momentous meeting that was unable to take place due to the deteriorating health of Obama’s hero.

As the South African government acknowledged that these were the leader’s final days, we must reflect on the achievements of one who is not only Obama’s, but also the world’s hero. He fought for and won the rights of black people and ended apartheid in South Africa, and led the world’s most amazing, completely peaceful, revolution. Just like another man who started in South Africa – M K Gandhi, nearly a century ago. Nelson displaced the racist rulers without firing a shot, after suffering 27 years of torturous imprisonment at their hands, and won a Nobel Peace Prize for his efforts. However that is not the even the greatest of his achievements – his efforts after South Africa’s independence, to unite 2 races of people who have had a mutual hatred for each other and suffered atrocities at each other’s hands in the last 100 years – Gandhi’s true spiritual successor – he achieved what Gandhi did in India, in an even greater measure – he prevented the bloodshed which was inevitable, and led his country beyond their wildest expectations. I could go on and on – he has done so much for the world – it is only fitting that we honour him in his final days.

So, let us never forget the great man, who never ever gave up on peace and the goodness of the human.