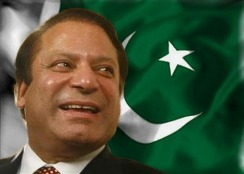 Nawaz Sharif, leader of the Pakistan Muslim League-N, on Monday, won the most historic and important election in the history of Pakistan – the first ever democratic transition from one elected government to the other, without any military or presidential intervention. In a 66-year history, Pakistan has had 23 different governments – none of which have ever completed a full term. Nawaz Sharif, in particular, a Modernist opposition leader, was deposed by General Pervez Musharraf during his second term as Prime Minister in 1999 and exiled for the last 14 years. Returning now, he has won an overwhelming majority of 123 of 254 seats in the National Assembly, in an election turnout of 60% – one of Pakistan’s best ever.

The charismatic ex-cricketer Imran Khan and his Tehreek-e-Insaf was a contributing factor – he inspired many of Pakistan’s first-time voters to come and vote and has won seats in the Taliban plagued areas of North West Pakistan. Although he has a difficult task ahead of him, he has a plan to tackle the Taliban, and in a way, has been victorious in motivating Pakistanis to vote. Pakistan People’s Party, the party of assassinated former PM Benazir Bhutto which had formed the previous government, won very few votes due to widespread dispute & corruption allegations. India is particularly pleased with the result because of Sharif’s pro-India plans, while the world waits for his economic reform policy.

Although many are disappointed that the new inspiring leader who to tackle the terrorists has not won; the free fair election, along with the confident turnout in the face of Taliban threats and attacks, is definitely a huge sign of improvement and change in troubled Pakistan.