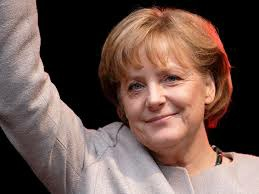 She is the current Chancellor (Prime Minister, basically) of Germany, the first ever woman to occupy the post, before or after unification of Germany (1989). She is at the helm of the European Union, holding it together in spite of all the problems, and is famed for her economic and environmental policies, which have transformed the country. She has been Chancellor for the last 8 years, and is one of the most popular/charismatic leaders since the unification. Her term will end in the election in September this year, where she will look to continue for another 4 years. She has built up German relations with the US, but has also severely criticized its NSA surveillance program (Edward Snowden leaks).