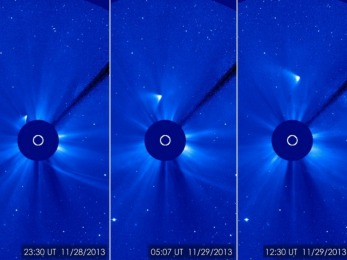 Every skygazer worth their salt (astronomers I mean) is waiting with bated breath this week to see if Comet ISON (widely billed as the Comet of the Century) has survived its close shave with our Sun which took place on Thursday evening – while everyone was busy with their Thanksgiving dinners and family reunions.

The event is significant for two reasons – because the Comet ISON has been circling the Sun for over 5 million years (before our species was anywhere near the evolutionary horizon) and so its life coming to an abrupt end now is quite historic. The second is that it’s a remarkable and little understood phenomena how these comets come from the Oort cloud at the far edge of the solar system hurtling in towards the sun and grazing it (at its closest approach on Thursday, ISON was less than a million miles from the Sun’s surface) and was traveling at a speed of a million miles per hour. Then on Friday it disappeared and none of the thousands of people, telescopes and satellites looking for it could see it. Everyone thought it was vaporized or broke up and did not survive the encounter with the Sun.

Today however there seems to be re- newed hope that a fragment survived and we may see a resurrection (in true biblical style during the weeks before Christmas). If it has survived the remaining fragment will be very hot and may have a long and bright tail that we can see in the morning or evening skies. If that happens it will be quite a spectacle and then ISON would have given us a story that befits it being called the Comet of the Century! Brilliant video here.