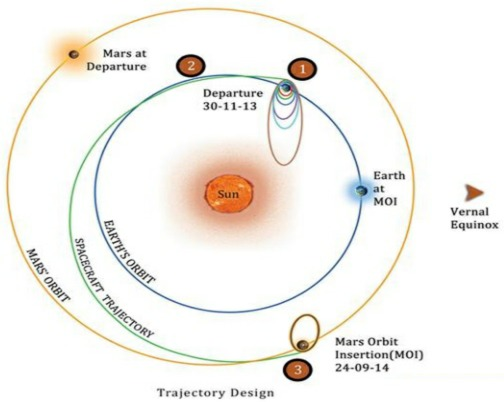 India’s Mars Orbiter Mission (MOM) cleared its first critical hurdle on Sunday (3rd Dec), when it completed its Earth orbiting phase and left Earth’s sphere of influence. It is the first Indian mission ever to leave the Earth’s sphere of influence (which incudes the Moon), and go beyond, into interplanetary space. Mangalyaan, as it’s known, had already orbited the Earth six times since it was launched two weeks ago (Issue 21), and now fired it’s rockets – giving the push that was needed to move away from the Earth, and go on to an orbit of the Sun instead. If successful, it will be the cheapest ever mission to Mars (India will also become one of the few nations to have reached Mars), since it uses a low cost slingshot technique. It has been slingshotted by the Earth to an orbit around this Sun, during which it will encounter Mars, and begin orbiting that. It will be searching for methane in the atmosphere and water on the surface. It will have reached the red planet only by September next year.