Don’t Mess With The Lady in Black 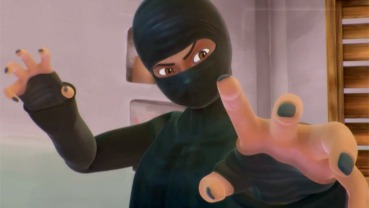 This one is real cool – the tag line for a TV show making news this week – the crime fighting ‘Burka Avenger’, a very topical concept  of women empowerment in Pakistan made into a cute, funny animated TV show – that has really gone viral. Creator Aaron Haroon, a Pakistani pop star of international fame, conceptualised a female superhero fighting “bad guys” when he heard of Taliban  and extremists shutting down girls’ schools in Pakistan, and decided to make this awesome Batman-like crime fighter for Pakistanis – mild mannered school teacher by day – unstoppable Burka Avenger by night! To take the emphasis away from violence, she fights with books and pens as weapons – a literal interpretation of Malala’s (Issue 9) message of fighting the extremists with ‘books and pens’ – but the resemblance of the main villain to a Taliban commander is quite suggestive . In spite of realistic, topical plots revolving around shutting down of girls’ schools and politicians dealing openly with villains, there has been virtually no response from hard liners, and ‘an overwhelming positive response’, in his words – showing a change in people’s attitudes.

Personally, I just can’t wait for this show to be released globally – I am watching for sure.