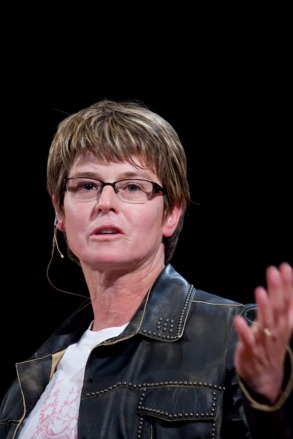 Close your eyes. Now imagine you have to cross a street. You don’t know how far that street is and you don’t know if you’re going straight and you hear cars whizzing back and forth, and you had a horrible accident that landed you in this situation.”

I’m going to tell you a story. It’s got nothing to do with last week’s news, its got nothing to do with you or your life. It’s just a story. The most inspiring story I have ever heard. The story of Ramona Pierson.
It all begins in the year 1984, with a young 22-yr old US Marine who excelled at Maths, and loved to exercise. She was developing algorithms that would aid fighter attack squadrons, and had just gone out for her daily run with her dog when she was involved in a horrific accident that changed her life forever. A drunk driver hit her and her dog at an intersection, after running a red light, killing the dog instantly and inflicting Ramona with unimaginable injuries. She was sent flying in front, and then the car ran over her legs – crushing both of them – and the bumper ripped open her neck. Her chest was torn open, she was blinded and unconscious, her lung was in danger of collapsing – she was as close to death as you can get – but passersby saved her life.

They kept her exposed heart beating, used pens to keep her windpipe open and lungs from collapsing, and got her to a hospital just in time. But that was when her terrible odyssey began. She was put into a drug induced coma and operated on time and time again. She survived – but woke up 1 and a half years later – 18 months spent in coma. And when she woke up, this sprightly US Marine was blind, disfigured, bald, unable to speak, unable to eat, without legs, covered in scars, and weighing 30kg.

“I was in a grocery store with one of the ladies, and I hear this kid ask his mom, ‘What happened to her?’ When the mom replied, ‘Shhh,’ I knew I must look really messed up.” Ok now wait – I sense you’re getting depressed – don’t worry, this is a story of amazing comeback – because although the rest of her body had been reduced severely – her brilliant algorithmic mind kept working.

The hospital labeled her a “gomer” – a hopeless case, and kicked her out soon enough, after some more operations and cosmetic surgeries. She was sent to an old age home, where the second half of her life began. The amazingly wise and resourceful seniors became her friends and mentors as they taught her how to speak, eat, and return to living life like a normal human being. Her descriptions of them, and how they taught her are very touching – but she remarks that it was bittersweet, because “they were declining, and I was getting better because of them.”

Her biggest hurdle was learning to cross the road again – she was now blind, and had already faced a horrific accident before – the fear was palpable. But her loving new friends at the old age home and her loyal guide dog made her achieve the seemingly impossible, and she began to sustain herself little by little, leaving the home in 1989, and starting to attend college. Her still intact mind helped – “I learned to create a cognitive map of the world, sort of like The Matrix,” she says. “I see the world in my head.” And she went on to study 2 years of psychology, get a master’s in education, and a PhD in neuroscience, all while facing a blindness she found “terrifying”.

It took over a 100 surgeries – implanting a nose that looked nothing like the original, regrowth of hair, translocation of fat, supported legs – but she began to look and feel like a normal human being again. Those years of struggle changed her as a person, and made her one of those few, who are beyond human. When her legs returned to full operation – she wanted to do everything – driven by the feeling that she had fallen behind the world in her years of rehabilitation – in spite of the fact that she was in perpetual pain almost all of the time. She became a blind rock climber and cross-country skier – imagine what courage that takes. She qualified for the Paralympics, and set many records there. Then, she graduated to the regular, non disabled cycling team and won a silver medal at the National Championships – all this while she was blind. And finally, 11 years after the accident, she opted for an experimental surgery that returned sight to her – after 11 years of blindness, she could see again. And she just continued moving forward – remaining a courageous adventurer, she became an inspiring innovator.

It started with working at a brain research center to help soldiers returning from the Middle East, before her attentions turned to education. She developed a data-driven software called The Source to help the Seattle public school system, and then went into the industry fully with her first startup SynapticMash that transformed the philosophies behind the software into a business. It was acquired by a multinational learning company Promethean World soon after for $10m; and Ramona started working there to become Chief Scientific Officer and Head of Policy just 5 years later. In 2012, she co-founded her most important venture – a social network called Declara – an intelligent social learning platform that aims to connect people to the content their looking for by adapting according to the behavior of its users. For example, if you want need some info related to biotech, it finds users who are experts in biotech and connects you to them, while also giving you latest information about what you are looking for. Although only in a corporate hemisphere at the moment, it just recently reached $5m in amount of money raised through investment. From being the equivalent of an infant – she couldn’t speak, see, eat, walk – disfigured beyond recognition – she has become the CEO and founder of a $5m company, a premier entrepreneur, and one of the world’s major thinkers and innovators. WONDER WOMAN.