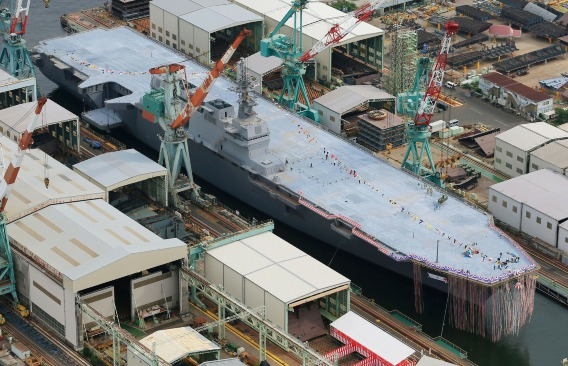 On Tuesday, anniversary of the horrific Hiroshima atomic bombings, Japan unveiled its largest naval warship since WWII – the Izumo. Named after an ancient and grand Shinto shrine in Japan, it is technically a destroyer – but has the size and looks of an aircraft carrier – and will carry a maximum of 14 helicopters, but no aircraft.

This is in accordance with Japan’s post-WWII constitution, which prohibits military expansion beyond the needs of self-defence, and the “helicopter carrier” has been commissioned for disaster response, surveillance, and anti-submarine warfare. However, it is a part of the Japan boosting its navy after a while, and giving its military a freer hand to act, in response to increased Chinese aggression in those waters. Putting aside the politics, that is one super ship.