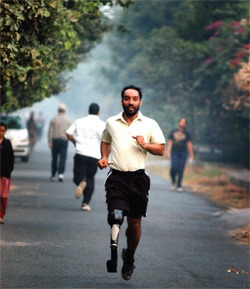 Major D P Singh is India’s first and only blade runner. On July 15th 1999 Major Singh was leading an attack against enemy soldiers during the Kargil war when he has hit with a mortar explosion and wounded. When he was brought back to the army camp the doctors declared him dead, when one of them noticed he as moving they quickly operated on him and saved his life. He lost his right leg though. He recovered, retired from the army but did not give up faith and his desire to walk and run. He is today 39 years old but he is fit and takes part in marathons and half marathons regularly. His dream is to run in the Paralympics of 2016 and represent India.