Clash of the Chess Titans at Chennai 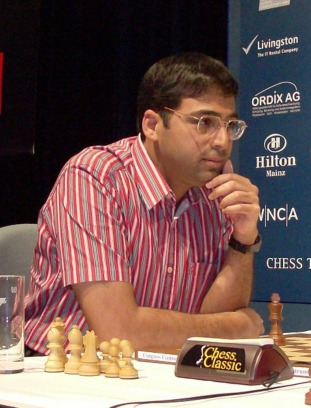 With all the media focus on Sachin Tendulkar’s retirement, we have missed the World Chess Championship challenge match going on on Chennai between India’s own five time world chess champion Vishwanathan Anand and the young Norwegian, Magnus Carlsen, World No. 1 according to the rankings.

In our cricket crazy nation we always forget that Vishy Anand is no less accomplished a sportsperson than Sachin Tendulkar and has been undisputed World Chess Champion since 2007 and won the championship five times. He is undoubtedly the greatest chess player of his generation though his fame is much stronger in the rest of the world than in his home country of India.

However, Magnus Carlsen is only 22 years old and has already achieved the highest ever point rating of 2872. They are playing a best of 12 matches chess prize fight in Chennai over two weeks. At the end of the first week – Carlsen leads 4-2 having beaten Anand in the 5th & 6th matches after the first 4 were drawn. Anand forfeited the 5th game in 58 moves after making some mistakes, and lost quite badly (playing as white) in the sixth one.. Vishy’s position is not looking good – but remember, he’s the king of rapid chess, advanced chess – all kinds of chess, and the champion of both world tournaments. The next six games will decide whether we are entering the Carlsen era, or if Vishy’s still the King.

References: The Guardian, The Hindu