So the leading story this last week, or last month, has been “The Rupee” – I’m not even kidding – its “oh no – crisis, disaster, catastrophe” every-where. And therefore, for once, we are opening with an economic cover story – no complex market theory here though – simple layman’s logic. For the past couple of months, the value of a rupee, as compared to a dollar (exchange rate), has been falling. This means that one dollar, which you would have exchanged/bought for Rs 58 a few months ago, will now cost Rs 65 – which is a lot. This means dollars are very expensive, and so is anything coming from abroad – and more importantly, that the true “value” of a rupee, i.e., how much stuff it can buy, is decreasing. Such a phenomenon is called depreciation, and is happening mainly because of 2 reasons. One is inflation – rise in the price of commodities or items in the market (a bad thing) – which de- creases amount of items one rupee can buy, or depreciates it – but the inflation has not been so bad as in the last month. The other major reason is rise in demand for dollars in India recently – like your local subzi mundi – the currency exchange is also a market – if people want a vegetable badly (if it’s in demand) its price goes up – and right now, the dollar is the most wanted subzi. And now, how does this affect you? Well not so much and not only negatively as the local papers would lead you to believe – the grocery bill is not about to double – but it still does impact you in the following ways – 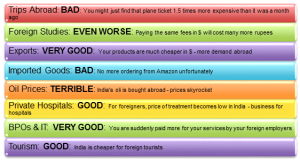