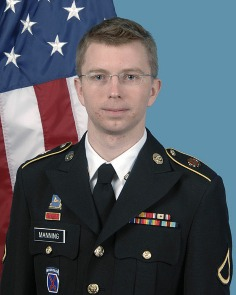 The innocent-looking young US Army Private Bradley Manning, whose story we have been following since the beginning of IW, was finally sentenced on Wednesday to a harsh 35 years in prison. Considering that he may have got over a 100, and the fact that he could be released within 7 years on parole – its not as bad as it could have been. As we explained last time, although he was cleared of the most serious charge of aiding the enemy, the young private who leaked hundreds of thousands of classified documents (Iraq and Afghanistan war related) to WikiLeaks was convicted on most other counts – espionage, fraud, theft, etc.

For the first time, Manning said that he regrets his decision – 35 years in jail is not an enticing prospect – especially since he wished to change both his name and his gender – which will have to wait till the end of his sentence. Dishonorably discharged and serving this much time, his story is a blow to leakers and whistleblowers in the army, and a victory for American intelligence and internal security.