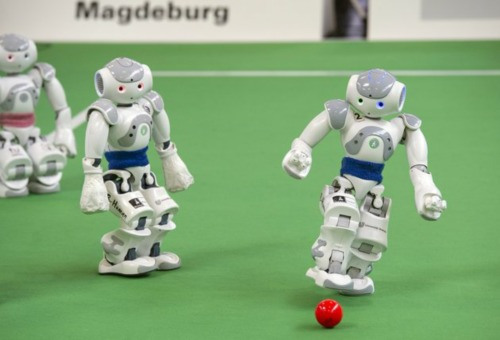 A little on the lighter side, the RoboCup Soccer Championships 2013 took place in Eindhoven in the Netherlands a cou- ple of weeks back, and I thought this was the perfect issue to discuss them – a more fun look at the rise of the machines. There were 2,500 participants from over 40 countries, watched by almost 40,000 people, playing a knockout tournament divided into different categories based on size and humanoid-ness. Extremely fun and comical to watch, the object of the tournament, and all the cute robots is to find a team, by 2050, that can beat the human world champions.

And I understand why that date – robots that break into a dance before a crucial penalty shot are definitely not ready. The humanoid robots – arms legs and all – are especially clumsy, while the little robots with wheels and sensors and devices for kicking the ball can just about create something resembling a foot- ball game. A very interesting and special feature of the competition is that no human inter- ference is allowed during the match – the robots must score and save goals, and make plays entirely themselves – it’s a cute idea, isn’t it?