The Comet ISON is Swinging By Keep Your Eyes Peeled 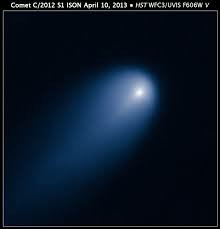 And its finally here – the much awaited, much anticipated – possible comet of the century – oh wait, you have no idea what I’m talking about. Of course not – I didn’t either – but among scientists, this comet ISON is something of a celebrity. It is massive – 3,100 miles across – and scientists hope that this comet will provide a magnificent shining spectacle when it passes by Earth. NASA has even launched a giant balloon to track and photograph this super-comet.

But before you get all excited for a brilliant nighttime display in December, I must become the devil’s advocate, and warn/inform you of the news this week. On October 1st (one exciting day), the comet passed close to Mars, and was photographed by one of the various NASA observatories/rovers on Mars, and the results, shown alongside, were less than satisfactory. Lets hope we get a better show.

By the way, this is a must try super cool graphic thingy-www.solarsystemscope.com/ison/