A Look Into the Heart of a Black Hole 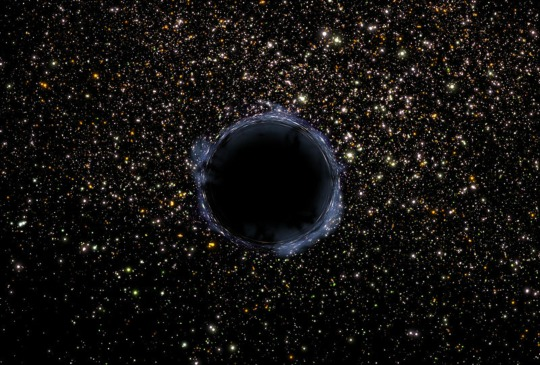 Modern day astronomy revolves around the basic concept of capturing light from far away objects in space and using this light to tell us where the object is and what it is. This works for everything in space – be it a star, a galaxy, or even a planet (we use deviations in light from a star for that last one) – except the two things that are most mysterious and most important. Black holes cannot be seen with light – because they are BLACK HOLES – objects that have so powerful a gravitational pull that light cannot escape from their grasp – they absorb all the light and therefore cannot be seen. So telescopes can’t detect them – the only way we know they’re there is because it’s an unusually dark spot surrounded by bright stuff – not a very soundproof technique. Especially because we may know where they are – but we can’t study them or their insides – no light comes out of there.

But scientists are now working on a way – that involves using the only thing that black holes affect/are affected by to detect them and study them – GRAVITY. To be more specific, gravitational waves (ripples in space-time) – emitted by major objects and events, including objects with high gravitational pull like black holes. These disturbances, unlike light, are not absorbed or affected by objects in their path – and can come straight from the heart of the black hole to our detectors on Earth. It would be the successor to the telescope – except for one little hitch – we don’t know how to detect them yet.

The LIGO (Laser Interferometer Gravitational-Wave Observatory) Project was inaugurated in 1992, and started operating in 2002. It used two laser waves – fired at the same time and received back at the same time – any slight time lag or disturbance indicates a gravitational wave. In 2010, it was temporarily shut down so that it can be upgraded – in all 8 years, it hadn’t detected a single gravitational wave. But don’t give up hope yet – they are increasing the sensitivity of LIGO and re-starting operations this year. Chances are, however, that we still won’t get a detection – because LIGO, awesome as it is, is based on a mountaintop on planet Earth, and that is a problem. On Earth, with all its shifting tectonic plates and interference, such a tiny disturbance can’t be felt. But up in space – it probably can. Therefore, two new projects have come up – one that expands LIGO’s technique to fifteen million kilometers in space (LISA) and one that uses a completely new technique.

The Laser Interferometer Space Antenna (LISA) involves an equilateral triangle of satellites orbiting Earth with 5mn km lasers between them. Similar to LIGO, disturbances in the lasers show presence of gravitational waves – but such long lasers and that too in space mean its almost a 1000 times more sensitive than LIGO. The newest technique, atomic interferometry, is still prototypic and untested, but even more exciting. Instead of difference in lasers from satellites millions of km apart, it uses two satellites just a thousand kilometers away from each other with one extremely cold cloud of atoms outside each one. The atoms are placed in specific positions with respect to each other by lasers between the satellites – any slight change in position indicates a grav wave. Its sensitivity is even higher than LISA – these 2 projects may really show us what’s inside a black hole, and the other place light cannot take us – they may show us the beginning of the universe.