It’s Not a Turkish Spring, But Much More 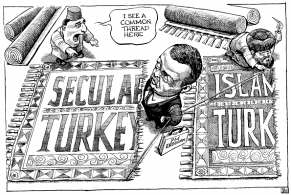 In the last couple of weeks, Istanbul, the capital of the world’s most secular and modern Islamic country, Turkey, was rocked by massive protests, which surprised the world, and has created talk of a Turkish Spring. The protests are targeted straight at Prime Minister Tayyip Erdogan, who has constantly denied any possibility of a Turkish Spring, saying that Turkey is a secular democracy, unlike any of the other Arab Spring countries (Tunisia, Egypt, Syria, Libya – all Islamic Dictatorships). He is right – it is not a Turkish Spring. He is right – Turkey is a secular democracy. But he is wrong – the protests are not a minority creating trouble. He is wrong in the way he has reacted to the protests – strong arm police action, calling the protesters “looters” and saying he will put a stop to the “undemocratic” protests.

What is so democratic about the fact that a country, which is supposed to have elections every 4 years, has had the same Prime Minister for the last 10. The protests may have started simply because of demolition of a historically significant park in Istanbul (Gezi Park), but brutal police action and Erdogan’s comments have revealed the people’s growing angst against their authoritarian leader, resulting in a massive nation-wide protest. Yes, Turkey is secular and democratic, but perhaps the people feel Erdogan is trying to subtly change that, create a more autocratic, Islamist, and dictatorial rule, and they object.