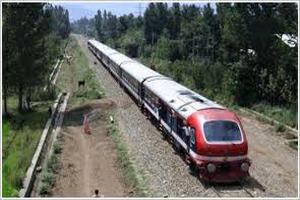 A brand new train and rail route linking Jammu and Kashmir through India’s longest tunnel across the mighty Pir Panjal range has become a reality. The eight coach train connects Baramulla (Qazigund) in north Kashmir to Banihal town in Jammu. The 11.2 km tunnel has been constructed using the New Austrian Tunneling Method (NATM). It is for the first time in the country that NATM has been used on such a large scale. The project is not only an engineering marvel but also an all weather link for travellers as the national highway usually gets cut off in winter due to the snow. The new line marks the beginning of the first rail connecting Kashmir with the rest of India. (Jammu was conected after independence)