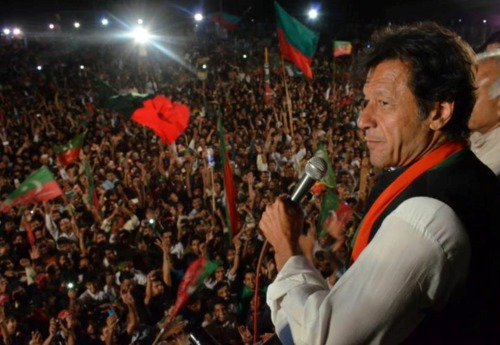 He’s the ex-cricketer turned Pakistani politician who lost the last election – so what? He may be that, but he’s much, much more. For those who do not know, Imran Khan was Pakistan’s most successful cricket captain from 1982 to 1992. After retiring in 1994, he came back to his troubled home (unlike many celebrity sportsmen) and engaged heavily in social work, activism and philanthropy.

He established Pakistan’s first cancer research & treatment hospital Shaukat Khanum Memorial Trust, amassing funds from all over the world to create a non-profit, state of the art hospital that provides healthcare to everyone – something new in Pakistan. He was also involved in education campaigns and projects to help disaster victims. But he became a real world leader after entering Pakistani politics by starting his party, the Pakistan Tehreek-e-Insaf (“Movement for Justice”), in 1996 – with an objective of restoring Pakistan’s judiciary, and solving the real problems of the people. A small new party, he became significant only recently, when the party contested in the 2013 general election to form government – Khan promising a sweeping victory for “truth” – and the party came an unbelievable close third, after Khan’s fresh uncorrupt approach to politics attracted the highest Pakistani election turnout in decades (covered in Issue 1)

He is the only Pakistani leader to have voiced strong opposition to the messy, murderous US drone strikes in Pakistan, the only leader to advocate a peaceful solution to Pakistani terrorism after years of failed military solutions, the only leader supposed to have declared, “white” financial records – a spot of cleanliness in the corruption of Pakistani politics. He is criticized as an inexperienced, glamour-loving celebrity, but for his supporters Pakistan finally has a charismatic leader – their last was the late, loved Benazir Bhutto – who inspires love and confidence in his people. A lot of Pakistani expectations rest on him, and we hope he makes a difference from his provincial government in Taliban-hit regions of NW Pakistan.