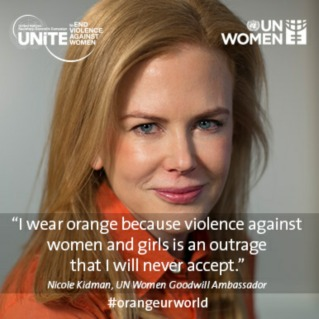 This is something that all of us should have already known – and I’m sure many of us did, courtesy of Google – Monday, November 25 was the International Day for Elimination of Violence Against Women. It is a day designated by the UN to raise awareness about violence against women and the fact that it is one of the most widespread violations of human rights in the world – the stats they give are simply shocking. A WHO study points out that worldwide, 35% of girls and women have faced physical and/or sexual violence – and in cer tain national studies, 70% of females have experienced violence from a partner.

However, the beauty of UN’s “Orange Day” program is to raise awareness of the problem and show that there is a solution. #orangeurworld on Facebook and Twitter allows you to express your support for this in a very unique way – take a picture of yourself in orange colours, and under it write “I wear orange because…”. Google, too, also did something very subtle but so helpful by putting a nice little ribbon on the Google Search page – click on it and it takes you here, to the home page of the Internation al Day for Elimination of Violence Against Women on the UN Women Website. The online response has been amazing, and some of the things done/celebrations have been even more inspiring. Thousands and thousands of people all over the world took part in rallies to mark this important day. Especially in India, which is the Fourth Most Dangerous Country to Be a Woman (according to Forbes) in the world, there were rallies in Kolkata and other major cities, led by social activists and social workers. Celebrated on the day of the assassination of the Mirabal sisters, political activists in the Dominican Republic, it is the beginning of 16 days of activism lasting till Human Rights Day on Dec 10.

If you want to be part of this – click here. The support and participation all over the world was wonderful, and so were the solutions offered. PLEASE watch this video, which tells you the whats and whys of the problem – and suggests a solution.