Geo-Engineering – Can it save the World? 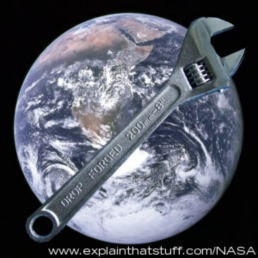 Geo-Engineering is the science, or science fiction, of changing or re-engineering the planet to avert global warming, or in general, to suit our needs – the bookish concept of our world built around us. It would involve using large scale technologies to remove CO2 and reduce solar radiation – possible methods are fertilizing the ocean with gigantic quantities of sulphates, etc. to grow phytoplankton that consume CO2, positioning thousands of mirrors in space to reflect sunlight, creating an artificial super- volcanic explosion to cool the planet, and planting millions of trees in deserts and fields. Sound ridiculous, don’t they?

But scientists are claiming that these last ditch solutions may be the only way we can save the world from the drastic effects of global warming, that have, from dire predictions, become an everyday reality. The passing of CO2 levels above 400 ppm, reported in our second issue, was really the final straw – marking the failure of the attempt to reduce emissions and the showing the dangers that we now face. So, is it true? Is the situation really that bad? Will we really have to float mirrors in space?

To the first question, Yes, global warming has reached a stage where climate is going crazy – freak disasters, unpredictable weather, and rising temperatures will become, have become part of life. But, is geo-engineering necessary – is it the only solution – that is more debatable. It is a dangerous solution, nevertheless, since such forced climate change may have unforeseen impact – drought, disaster, anything – we do not know. Further, it is only a short term solution – as long as emissions of CO2 keep rising, there will always be global warming. So the only real solution is to cut down our CO2 emissions. But research into geo-engineering need not stop. Because a time may come when there is no other possible solution – we must do something radical to save the planet. Some say this time is already upon us. My feeling is that it is just a bit too early to try playing God.