50 Years Since the Assassination of JFK 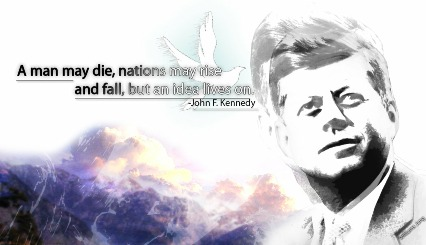 John Fitzgerald Kennedy was the 35th President of the United States, the youngest ever (at 43 years of age) to be elected to the office and the only one to have been assassinated in the last 112 years. As we mark the 50th anniversary of this event on 22nd November, we can reflect on his legacy and the remarkable impact it has had on the world we live in now.

The first thing to remember is that he was President only for 2 years and 10 months and he achieved more and changed the world in a deeper way than subsequent Presidents have done in 8 years and two terms. Imagine what he would have done if he had lived and served 8 years as he most surely would have. He also lived in a time of great challenge, threat of war and instability in the world. The cold war was at its peak and but for him we may be living in a post nuclear holocaust world right now. In the perspective of 50 years we can see, in the events lead- ing up to the Cuban missile crisis and the meetings with Russian President Nikita Khrushchev that led to the setting up of the US Russia telephonic hotline and the Nuclear Test Ban treaty, the beginnings of the move away from war and MAD (Mutual Assured Destruction) to the non-nuclear threatened world we live in now. He also presided over the great Berlin airlift and the building of the Berlin Wall. The end of the cold war and also the end of Communist Russia began in that time.He is of course known for the Apollo moon missions and the target that he set of putting man on the moon before 1970 which helped the US win the Space race. What is less apparent is that he let the Civil Rights movement flourish including Martin Luther King’s famous “I have a dream” speech – another great thing that happened under his Presidency.

The one thing he could not achieve was an end to the Vietnam War and he was working to do that when he was assassinated and if you watch Oliver Stone’s film JFK – you find there may be a connection. What has also been lost in the entire focus on the conspiracy theories around the assassination is that he was a leader who also turned around the US economy (it had been growing at around 1% in the Eisenhower years) which accelerated to over 5% growth rate for the entire decade of the 60s. He achieved all this in less than 3 years. After he was assassinated, the establishment went back to business as usual and the US continued with the folly of the Vietnam War, had rioting in the major US cities and the crime wave until the 80s. Today 50 years later, Jack Kennedy’s abiding legacy is that he kept the nuclear war from happening, liberated humans from the planet (now we are going to Mars) and made the world a more humane and tolerant place. Even though the gunmen stopped him on 22nd November in Dallas, I suspect he had done enough for the world and us.