The Return of Asterix 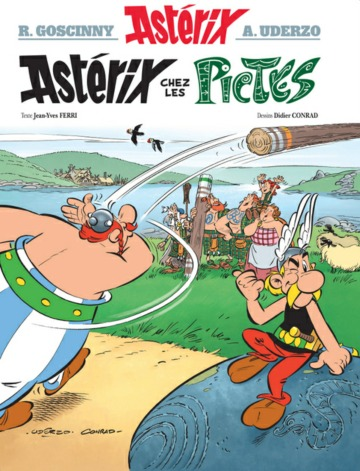 For those of us who have been fans of the Asterix Comic series –it’s wonderful to learn that Asterix and Obelix are back in a new adventure after a gap of 8 years! It’s called Asterix and the Pics and is the 35th issue of the series.

The Asterix Comic series about the indomitable Gauls and their resisting the mighty Roman empire, has a been a best seller comic series having sold 352 million copies and has been translated into 110 ten languages worldwide. The return of Asterix has created a stir because the comic series was Frenchmoments.com.au created way back in 1959 by Albert Uderzo (illustrator) and Rene Goscinny (writer). Sadly, Goscinny died in 1977 and from then Uderzo took on both illustrating and writing creating many more successful adventures for the Gaul duo , until Uderzo too stopped illustrating for the series a while ago.

The latest 35th issue has been created by writer JeanYves Ferri and artist Didier Conrad….the first issue without its original creators –However Uderzo , now 86years of age has supervised its production and has also drawn “Obelix” on the cover of the new adventure. I am definitely waiting to get my hands on “Asterix and the Picts” as I am sure many other fans are.