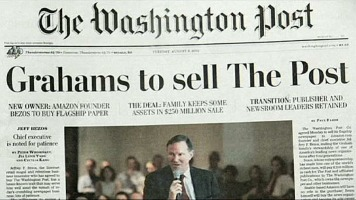 For everybody who is now feeling lost and looking dazed – I will clear all confusion in a moment – this is a financial article, but revolves around important matters and 2 very important companies. Last week, the news and media industry was rattled as 2 of the oldest and most reliable newspapers of the US were involved in major, shocking handovers. The first was when The New York Times, one of IW’s favourite and most trustworthy sources, gave evidence of its struggling situation by selling its Boston arm, The Boston Globe, for a massive loss. The NYT, who had bought it for a huge $1.1 billion 20 years ago, sold it for a meagre $70 million last week – making a loss of 1 billion on the deal – as the venerable old paper continues to slide into losses.

The second instance, perhaps even more significant was when The Washington Post, one of the most revered and trustworthy news sources (for me and the world), was sold by the Graham family (who owned it for 139 years) to Amazon CEO Jeff Bezos in an earth shaking move that illustrates the trend in the fates of newspapers – and the growth of the internet news industry. It is shocking since both of these are unbelievably important newspapers all over the world – even if you don’t read them, much of the news you get has filtered down from these ancients. And even more importantly, we see that the conventional newspaper industry is facing huge difficulties – to- morrow TOI or HT could be in trouble. But all is not bad – the owners of NYT have promised not to sell it – we hope that they can keep the promise, while the second case might just be good news – Jeff Bezos was the man who made Amazon – he might just revive the fallen giant.