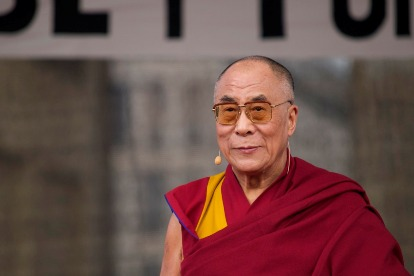 His Holiness, the Dalia Lama, is the spiritual leader of the Tibetan People – he is the 14th Dalai Lama (Head Monk) .
He was declared the political ruler of Tibet in 1950 at the young age of 15 – but unlike the Supreme Ayatollah or the Pope, he was never born with any cross border power or influence – he has earned his place in the world. In 1959 he was forced to escape into exile in India,when the Chinese troops suppressed the Tibetan uprising. He has since then been living Dharamsala in Northern India. He was the winner of the Nobel Peace Prize in 1989, in recognition of his non violent campaign for over 40 years to end Chinese domination of Tibet. The Dalai Lama is recognised as a respected world icon/leader, consistently labouring to obtain democracy for his people in Tibet – never giving up on his principles of universal respect for all, non-violence and peace.