Curing the Blind Kids of India 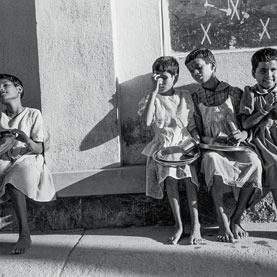 Giving sight to the blind seemed impossible to achieve, but a certain Indian professor is making it come true. Pawan Sinha is a professor of vision and computational neuroscience at the Massachusetts Institute of Technology. He studies the mechanisms and principals by which the brain recognizes objects and scenes. It took a small message and an inspiration for Prof. Sinha to start a concept which would change the lives of millions.

Moved by the plight of poor, blind kids in India, he began researching – and was met with some shocking results. He found that India is home to one of the largest populations of blind children, reaching the staggering sum of 400,000. Blindness was preventable or curable for more than 40% of the blind children, but due to poverty barely any children could receive decent eye treatment. Pawan Sinha then decided to help. Based on the Sanskrit word for light (Prakash) they started Project Prakash. So the first thing he researched on was: How does the brain learn to see? By putting together different studies and experiments they realized that the images as seen by the brain have many parts – colour, brightness and texture – all separately. Then the brain merges it together to make one picture. Children with visual disability are unable to see any of these things. So Pawan Sinha went deeper into eye study and experimenting to find out which surgery could help what disability.

In consequence, the Prakash Project group chose certain blind children on whom they conducted studies and experiments – to learn how they might cure them. An amazing discovery was that, contrary to popular belief, age does not really make a difference – according to Sinha, a surgery that cured an 8-yr old worked as well on a 20-yr old. One candidate named SK made them aware of something new. He had congenital aphika – he did not have the natural lens of the eye. The shocking revelation was that all poor SK needed was a pair of 20$ glasses which he could not afford. Project Prakash made glasses for him. After getting his glasses he could only see the world as one big colour blur. After research they realized that the eye and the brain needed time to settle. So after a year and a half SK could see properly. Similar studies and experiments helped millions of blind children in India, who would previously not be able to afford proper treatment and would have stayed blind for life. Every blind child who he helped had hardships in life but thank you Professor Pawan Sinha from bringing light into so many lives, and we hope you keep finding new cure.