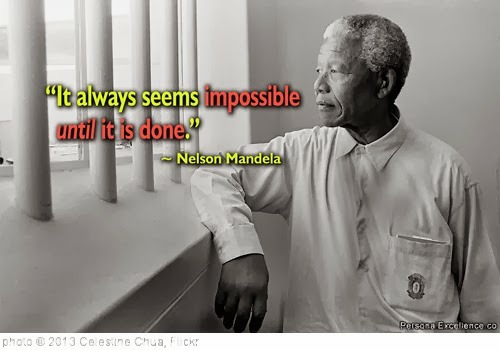 After nearly a year of “hanging in the balance”, the one and only Madiba passed away on Thursday – 5th of December, 2013 – a date we will all remember. Nelson Rolihlahla Mandela was the man who almost single handedly ended apartheid in Africa – a revolutionary, an activist and a great, great man. We wrote an article commemorating him in Issue 13 – and we will not explore his achievements here. Suffice to say: he will be sorely missed all around the world – for the kind of man he was, the unquestioning admiration he inspired in people, and his extraordinary capacity for forgiveness and courage.

After being mistreated and cruelly imprisoned for 27 years in Robben Island by white racists – he never entertained a single thought for revenge or retribution – far from it, he reconciled the victims of apartheid with it’s perpetrators. His sheer goodness can never be forgotten – truly, he was the Gandhi of Our Times. He died in his house in Johannesburg in the presence of his family at 9 PM local time on Thursday, at the age of 95, diagnosed with lung failure/disease. South Africa will observe 5 days of mourning after his passing, and rather touchingly, so will India.

In a nice gesture, Billboard has compiled a list of songs to commemorate Rolihlahla (his original first name). The timing is appropriate for the much anticipated movie Mandela: The Long Walk to Freedom which celebrates his achievements. Personally, I would recommend everyone to watch Invictus, a beautiful movie that really emphasizes on Madiba’s kindness and greatness. The man’s inspiring ideals and achievements will continue to inspire people around the world for years to come, and his extraordinary legacy will live on. He saw the worst that humanity could offer, but never lost faith in mankind. Hamba Kahle Mandela. (Good Bye, Mandela)