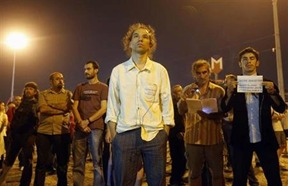 …is what they are calling performer Erdem Gunduz, who has been standing, silent and solitary, in the middle of Takism Square, in passive defiance to the Turkish Prime Minister’s requests to clear the square. He is being compared with icons like the man who stopped a tank at Tiananmen Square, and more and more protesters are following his example, and returning to passive protests, after Takism Square turned into a warzone the week before last. Prime Minister Tayyip Erdogan, against whom the protests were being held peacefully (reported in Issue 4), became impatient and sent in riot police to forcefully clear the area. This resulted in violence, and the hasty action has not been popular with the people.Nevertheless, the momentum of the protests were disrupted, but the silent protest, inspired by Mr.Gunduz, may really make a difference. Any which way, it is a truly admirable feat.