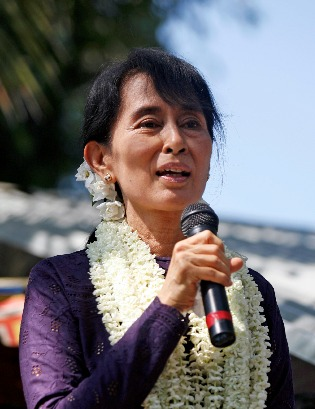 Her name, she often jokes, is so hard to pronounce that her followers simply refer to her as ‘The Lady’. Maybe its not that; maybe its because, in Burma, when you say those 2 words – there is only one person you can possibly be talking about. Aung San Suu Kyi. Imagine living, for 21 years, imprisoned in your own house – almost never being allowed outside – all because you believed in democracy. That is what happened to Aung San Suu Kyi (pronounced Awn San Sue Chee).
She started as a political activist in the late 80s, to reform a nation ruled by military dictators for the last 20 years, and led a campaign for democracy. After much protest, and brutal killing of protesters, elections were held – and she won. But instead of ceding power, the military put the nation’s elected leader under house arrest, under which she would stay for most of the next 21 years, and proceeded to rule the country under one of the world’s harshest dictatorships for another 20 years, resulting in Burma becoming the Asia’s second poorest nation, and the world’s second most corrupt. But there was a hope in all this – The Lady, sitting defiantly in her house, still upholding ideals of peace and democracy, still speaking out against the government at every opportunity. Her ever-smiling face become a source of inspiration for the Burmese people – hers soon became a household name in the country, even tho

ugh it was spoken only in whispers, and despite all efforts to suppress her – her influence only grew. The whispers turned to roars as her growing supporters began protesting for democracy and asking for her release. She struggled those 21 years, but never gave up hope, changed her stand, or even considered violence. She won the Nobel Peace Prize, and was awarded for her courage by Indian, American, and other governments. But it doesn’t end there for Aung San Suu Kyi, because her campaign for freedom actually succeeded. She was released in 2010, but released only back into the prison that was autocratic Burma – but she did not give up hope. She immediately legalised and reorganised her political party, who won the elections that occurred that year. Due to her efforts, the military junta dissolved the following year – democracy, change and reform returned to Burma after 50 years. An amazing person.