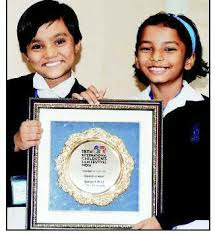 Rani and Shweta are two 9 year olds who study at the South Delhi Municipal Corporation School in Delhi. Rani’s parents are daily wage workers and Shweta’s father is a security guard. Not from privileged background certainly. So when INTACH (Indian National Trust for Art and Cultural Heritage) and MCD (Municipal Corporation of Delhi) ran a program to do a film project on any aspect of culture and heritage in their school, they used imagination and creativity and a little old fashioned “spunk” and asked their teacher if a person could be a part of culture and heritage. When the teacher agreed that a person could be a part of culture and heritage of the school, they contacted Phoolwati Amma, who had been the school’s housekeeper for 33 years and had retired recently. The 3 minute film they made which shows Phoolwati doing her work, being interviewed by Rani and then her farewell. It captures the all too human emotions she feels for the place she worked for 33 years and where she saw so many children grow up and leave. The film was selected from over 600 entries at the 18th International Children’s Film Festival in Hyderabad as the runner up in Best Direction. The award has already changed Rani and Shweta’s life, since they traveled to Hyderabad, stayed in a luxury hotel and had to address a large gathering. They are already working on their next directorial project – a film on Chhath Puja.

Photo Credits: The Times of India