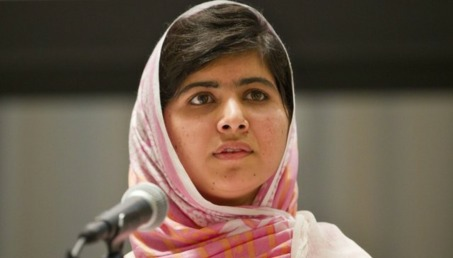 Malala Yousafzai – you might have heard the name, then again, there is a good chance you have not. Because I certainly hadn’t until last Friday, which was Malala Day, by the way, when this amazing young teen addressed the United Nations in its entirety, a little 16 year old, addressing the world’s great leaders. Britain’s Ex-Prime Minister Gordon Brown, UN General Secretary Ban Ki Moon, and representatives from all 193 member nations of the UN were present to witness her inspiring speech (its really moving – please do watch when you can), at her first public appearance since she was shot in the head by the Pakistani Taliban last year.

Yes, shot in the head, in a targeted attack against a young girl who was daring to raise her voice against the terrorists, inside their home turf in the Swat area of Northern Pakistan. But that,as she said in her speech, is not why she wants to be remembered –not as the girl who was shot by the Taliban, but simply as a girl who has raised her voice for general education and specifically girl’s education around the world, and especially in Pakistan. Therefore the focus of this article too will not be the shooting, instead it will focus on this girl, who was voted as one of TIME Magazines 100 Most Influential People for 2013, who is she, whose name has already been put forward for the Nobel Prize for Peace, and what she said in her speech on Malala Day.
Malala’s life as an activist began anonymously, in 2009, when she began writing a diary about her life for the BBC, who published in the form of a blog under a fake name (Gul Makai – “corn flower”). For the first time, she showed the world the plight of young children, women and the general people in the Taliban controlled areas of Pakistan, the daily struggles of their lives – as BBC Urdu editor Mirza Waheed (who worked with Malala on the project) says,”….. we did not know how ordinary people lived under the Taliban [until then].” She told of how gunfire and bombings became a daily part of their lives, how schools would be shut down or simply destroyed, the fear of going to school despite threats and no-shows at school, of being told not to wear school uniform as a girl – come incognito, and public beheadings and violence all the time. But aside from the stories of her life, we also saw the sincerity of a young girl in Pakistan in her desire for education – and her impassioned plea for the cause of girl’s education all over Pakistan. We saw a rising young leader, who would condemn military intervention in Swat, which drove her away from home, and who would become a champion for girl’s education.
After the world was inspired by her heart-warmingly childlike and scarily personal accounts of Swat, she and her father finally decided to forgo the anonymity, mentioning her real name in certain blog posts later. She then began more public campaigns, appearing on television even to openly advocate female education, criticizing politicians and terrorists alike. Supporting girl’s education was unheard of in Pakistan, and young girls in politics was unimaginable. She was approached by the New York Times, after the end of her BBC Diary, for a documentary film centered around her life, A Schoolgirl’s Odyssey, that showed on screen the horrors of life under the Taliban – described in her diary – and the deprivation of her education she so badly wanted. From then on she started to go from strength to strength, inspiring young Pashtun girls all over Pakistan, who would write to her as their representative, and start going to school based on her example. She and her father, also an activist, would soon begin to face death threats from the Pakistani Taliban, who wanted to silence this young girl who was raising her voice against their rule.
Citing Benazir Bhutto as her inspiration, she spent the next 2 years deep in social and political activism, giving speeches and getting involved in various projects relating to education However, as her impact and popularity grew, so did the number of death threats – and one day, in October 2012, Malala Yousafzai was shot in the head.
The Taliban gunmen boarded her school bus, and threatened to kill everyone if Malala did not identify herself. The brave 15 year old identified herself, and was consequently shot in the head, the bullet lodging itself in her spine. Two friends of hers were also hurt, and she was rushed to hospital soon after, and had to be operated on immediately. She lapsed into coma, with head injury and a bullet in her spine, and had to be taken to a hospital in the UK, who had along with many others offered medical treatment. She struggled for the next couple of weeks, after which she was finally allowed to meet her family, and on 3rd January this year, after 3 months in hospital, she was released.
Her shooting became a news sensation, catapulting her to global fame – response from celebrities and world leaders – the lot.
The actions and resolutions taken after her shooting were truly significant – a UN petition titled ‘I am Malala’ (the title of her coming biography, by the way), a Women in the World Foundation campaign, etc. – with the general theme of work for education in Pakistan, girl’s education, and education in general. And those were her goals, weren’t they?
In her speech, she spoke of Gandhi, the Prophet, Martin Luther King, Christ, and Benazir Bhutto, as her inspirations and guides. She said that her aim was education for children everywhere, and that she had no agenda against the Taliban. She said that in spite of what they had done, she would never advocate the use of violence, even against them. She said, “Even if the Talib who shot me was in front of me, and you gave me a gun, I would not shoot him, because non-violence is what I believe in”. Truly inspiring. She said that nothing has or will change because of the shooting, her campaign for education will continue – she is not scared of anyone. Instead, she says she has emerged stronger and more determined after the incident – she will continue to fight the Taliban with “books and pens”, and push for children’s education worldwide. Even after being shot, she is continuing to fight for her cause – not an iota of revenge in her mind – she is stronger than ever. Wow. Unbelievable.