Landing a Super Hercules At the World’s Highest Airstrip 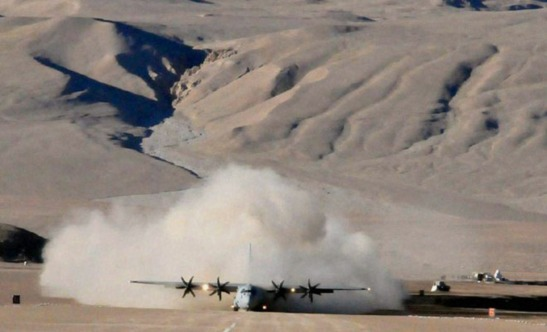 Last week the understated Indian Air Force impressed the world, and managed to land a massive 35,000 kg (when empty) C-130J transport aircraft on the Daulat Beg Oldie airstrip in Ladakh. Apart from being a record for the IAF, and for the C-130, it is the highest a plane this heavy (or any heavier, for that matter) has ever successfully landed. Its very impressive for them – since they are one of the least experienced air forces with that particular airplane – and is also a very daring no-nonsense message to China from the world’s largest democracy. For this airstrip is right next to the line of actual control in Ladakh, the site of a military standoff between the 2 nations in April, and landing a Hercules (which can carry 20 tons or 20,000 kg, by the way) there gives enhanced airlift capability to supplement Indian ground forces with supplies and reinforcements incase of conflict. They’re getting serious alright, and showing off the airpower to back it up – it’s also a landmark for the recently activated airstrip. After China publicly admonished the idea of India activating advance landing positions near such a tense border, the IAF has done just that, along with increasing its deployment (of troops, supplies, weapons, and even tanks) capabilities six-fold, and breaking a few world records along the way.