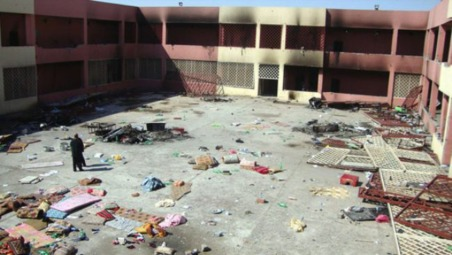 The chaotic anarchy that is the nation of Iraq just got a whole lot worse on Monday, when mass breakouts from 2 of the country’s biggest prisons, including Abu Ghraib, resulted in a shocking 500-1000 ex-murderers and terrorists being released back onto the streets. The al-Qaeda have claimed responsibility for the attack, and while confirmation will take time to come through, the effects are already being felt, in a war-torn country that has remained in a state of violent peace since the American invasion. And experts have predicted that this latest disaster, after recent months of increased religious and political violence, might just tip the country over the brink………into civil war. The nature of the disaster is heightened by the prison that was broken into – Abu Ghraib.
For those who don’t know, Abu Ghraib was a terrible place, a detention facility first used by the dictator Saddam Hussein, and later by the American forces, to interrogate and torture people mercilessly. It was made extremely infamous when photos of the conditions there were published online, a major turning point during the war. The place is a symbol of the American destruction of the country in the war, and a symbol of hate against the US – a perfect reason for al-Quaeda to attack. Meanwhile, the prisoners kept there could not have been nice people and we hope that their escape will not have too great an imact on the country, which was victim to a spate of Sunni-Shia violence before the escape, and already a terrorist bombing after it.