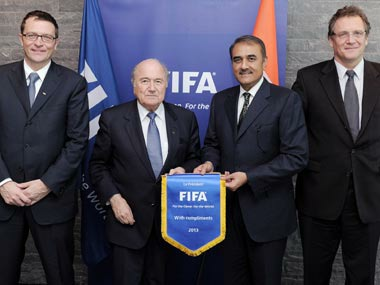 FIFA announced last week that India shall be hosting the U-17 Soccer World Cup in 2017. This is a great honour for a country whose World Cup experience is virtually nil. A total of 6 countries had submitted bids to host the tournament to FIFA. These were Azerbaijan, Uzbekistan, The Republic of Ireland, South Africa and India. On 5th December, FIFA announced that India would be hosting the tournament. It had been an extremely joyous moment for the entire country. India has never played in the FIFA World Cup or the FIFA U-17 World Cup. India has never hosted a FIFA tournament. Soccer is a sport that has only recently caught the fancy of young people in India (more in the cities) mainly due to the broadcast of English Premier League and other European club tournaments. Of course in our vast country there are pockets of soccer fandom – Kerala, Goa, West Bengal to name a few. However they have not really produced enough good players to help the Indian team reach any level internationally. If the hosting of the world cup leads to more talented youngsters taking up the game it can change the record. That is why this could revolutionise the sport in the country.