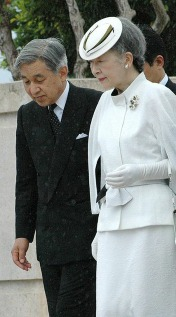 In today’s world, there is only one reigning monarch with the title ‘Emperor’. He is the world’s only ‘Emperor’, and he’s visiting India – so that’s a big deal. He is the Tenno (heavenly sovereign) of Japan, Emperor Akhito.
It’s also a big deal because His Imperial Majesty the Emperor (official address) rarely leaves Japan – and that too only for very important occasions. What’s interesting is that Akhito and his wife, now Empress Michiko, last visited India exactly 53 years ago, on November 29, 1960, but back then they were just Crown Prince and Princess. So it’s the first time ever that the official Emperor and Empress of Japan are visiting. It’s a normal diplomatic trip – but its timing, and the fact that no Japanese Emperor has ever come here before – making it very important. Another proof, as we said in Issue 4, of the coming alliance between India and Japan.

Photo Credits: Courtesy of US Navy