Riots, Rampage And The Return of The Tyrant 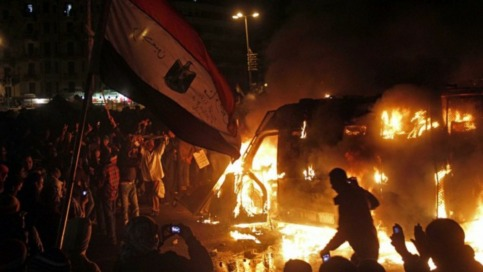 I know you’re kind of bored of Egypt – but its important– so I’ll keep it short. 1,000 people dead in the last week in clashes and riots between pro-Brotherhood and anti-Brotherhood supporters as Egypt slides further into the vortex of civil war.
As The Economist explains brilliantly, Egypt is usually divided into 3 political groups – theIslamist extremists, led by the Muslim Brotherhood; the “state” (bureaucracy, army, judiciary, police – Mubarak’s old gang);and the “people” – non-bureaucratic, non-Islamist liberals who get out on the streets from time totime and voice the public opinion. This last group is the largest and the most disorganised,meaning the state or the Islamists are normally theones who take power – by allying themselves with the “people”.

In 2011, the Islamists did this and removed the tyrant Hosni Mubarak (a “state”guy) from power with help of Egypt’s people during the Arab spring – but then they misused the power. So, in 2013, the state (in the form of the army, police and later judiciary) retaliated, using the people’s discontent to instigate another revolution, in which they returned to power. But that’s when things took a turn for the worse, as the army’s rash actions last week (Issue 13), and their release of the terrible dictator Hosni Mubarak– free of charge – this week, have turned public opinion, which was with them, against them. Now the“people”,have become divided, and angry – some shocked at army massacres,some shocked at Brotherhood violence – rioting ensues.

The release of Hosni(from prison to house arrest) is even scarier, because it shows the army/state is now so departedf rom/unafraid of public opinion that it is releasing the hated tyrant without punishment.But we can still hope that this will shock some Egyptians into sense, maybe call for an end to brainless violence and ask the army some tough questions. Because wherever Egypt is going, it is probably not democracy, but it can still aim for peace.