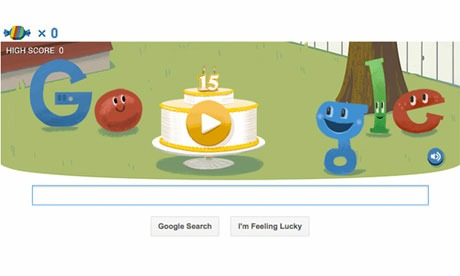 I am sure you all heard that Google turned 15 on 27th September and celebrated it in typical Google style, with a Google doodle which was a game that users could play for a few minutes, and feel lighter, freer, happier in their day, taking a pause in looking for whatever they wanted to find on the internet.

Here are some things that you may not have heard and would put in perspective what Google and it’s two 40 year old co-founders (yes they were 25 years old when they founded Google in 1998) have achieved in a short period of 15 years. Google was the 10th search engine in the market – if you are old enough you may remember the others – alta vista, excite, lycos, infoseek, magellan, looksmart, webcrawler and of course ask jeeves! It was initially started as a Stanford University research project by the two research students Larry Page and Sergey Brin. Their PageRank algorithm quickly gained popularity because of it’s search results (based on how many links were on the page to other pages – the concept being that pages with many links to other pages where better or more relevant to users) and it’s clutter free plain white home page was a brilliant design.

They just launched the 3rd generation of the search technology this week, it’s called “hummingbird”. The name of course was based on the mathematical concept of the Googol (the largest named number in mathematics which is equal to 10 to the power 100). Over the years they have remained true to the company’s mission which is “to organize the world’s information” and it’s noble vision “don’t be evil” to a remarkable extent. They have kept investing in new ideas and ventures informed by their vision and mission – from GMail (launched with unlimited storage and search ability in 2004) Google Maps (organizing the world’s locational information), Google News (my go to newspaper now) to Google Glass(Issue 15) Google Loon(Issue 6) and Google Health (last issue). They also bought Youtube in 2006 and kept it free and funded for us to enjoy. Then of course there is Android (another acquisition – did you know they bought Android and did not make it)!

Google’s IPO in 2004 was the first big IPO to use the Dutch Auction method of pricing, which let’s investors determine the price of the shares instead of the investment banks. If you had bought the share in 2004 (for $85 per share) you would be happy and rich now – current price is $876 per share! It is now the world’s 3rd most valuable company with a market value of $ 290 billion. They still also play an April Fool’s joke on the world each year with a press announcement on April 1st that turns out to be a hoax! Fifteen years and all this success later, the co-founders still want to change the world (little realizing how much they have changed it already) and solve problems like – global warming, death, driving (everyone should have a self driving vehicle in a few years!) and of course making the internet a useful and free place where all of us can go each day to learn and find stuff! Happy birthday Google!