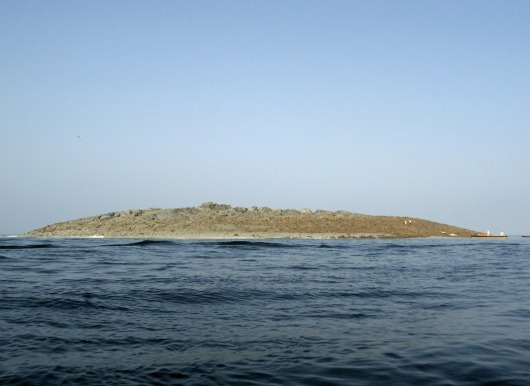 The earthquake that hit Balochistan in Pakistan on Tuesday was truly horrific – a 7.7 magnitude monster that killed over 300 and left devastation in its wake. But what followed was truly amazing. Barely half an hour after the locals felt the destruction of they earthquake, they saw a massive, massive landmass just rise out of the sea in front of their eyes, off the coast of Gwadar, a town in Balochistan. Mr. Baloch, a local journalist, describes his shock when he saw “this grey, dome-shaped body” appear outside his house, and “hundreds of people gathered to watch it in disbelief”.The island, that had come out of the sea that day, was about 300 feet long, and nearly 70 feet above the water – something that big just appearing out of the sea is very, very rare.

It is technically a “mud volcano”, which is not a volcano but a mud formation resulting from the excretion of hot water, mud, and methane from below the earth. The locals were really fascinated by it, and despite warnings from authorities (due to high methane levels being emitted from it), the island was full of people by evening. Though it’s a mud island – it is firm to stand on, parts of it being solid rock and others being made of fine sand, and the locals have wasted no effort exploring it. Its not the first ever such island to burst out of the sea – but its size and solidarity has been termed as “extraordinary” by many scientists – normally such islands disintegrate after a few months, but this one may be around a little longer than that.