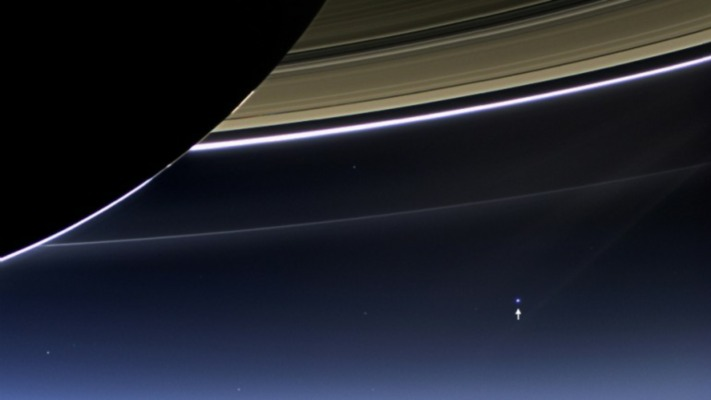 This amazing shot was taken from 1-and-a-half billion kilometers away – that’s very, very, very, very far – and guess what that little blue dot underneath under Saturn’s wings is – yes, its our very own, Planet Earth. It doesn’t seem like much does it? But as scientist very excellently puts it, “We can’t see individual continents or people in this portrait of Earth, but this pale blue dot is a succinct summary of who we were on July 19.” The picture is truly amazing, and shows us how tiny and insignificant we are, even from just inside our Solar System.

The picture is the second furthest pic taken of Earth, title for the farthest snapshot goes to the Voyager 1, which took the famous “pale blue dot” picture from the edge of our Solar System, back in 1990. This time, we were told that Cassini was about to snap us, and various poses, posters and signals were made, but obviously, none made it to the photograph. However the people’s spirit was sweet and amazing. The second picture, below, is the first of its kind, capturing the Earth and the moon as distinct entities from that distance using Cassini’s high-resolution wide-angle camera. Quite something, isn’t it?