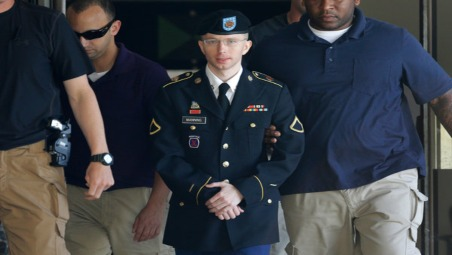 Bradley Manning, the boyish young US Army Private, an intellegence analyst for the Pentagon who made news in 2010 when he confessed to leaking hundreds of thousands of classified documents pertaining to the Iraq War, Afghan War, and America’s illegal detainee program, was finally tried and convicted on Tuesday.

He supplied WikiLeaks, the international government secrets publisher, with thousands of videos, showing atrocities committed during the wars and during interrogation of prisoners by American soldiers, classified US diplomatic cables, and war reports, which were then published by WikiLeaks, causing a storm in Iraq, Afghanistan and around the world, and creating deep embarrassment for the US government. The correctness/legality of his actions have been greatly debated ever since, government officials arguing that he has endangered many American soldiers and diplomats in foreign nations, and also indirectly supplied terrorists with secret information, while his supporters argue that he has simply, and for moral reasons, revealed the inhumanity of past US operations – telling the world the truth, and not revealed any serious info that might endanger operatives or aid terrorists.

The debate was finally put to rest on Tuesday, at a military court martial infront of an impartial judge, after a long wait of 3 years during which Manning was illegally kept in solitary confinement for long periods of time. The judge cleared him of the most serious charge against him – aiding and abetting the al-QQaeda/the enemy, after which she proceeded to pronounce him guilty on 20 of 22 charges against him – plunging him in dire straits. He can still face up to 136 years in jail, and is likely to spend several decades imprisoned for his “crimes” – how much time will be decided during his sentencing next month – but the fact remains that despite a small initial victory for his defenders – he is not been labeled a traitor – Bradley Manning has been found guilty and charged with a collection of crimes.

Whether that is good or bad is for you to decide, but this verdict will impact the world – we cannot know if it will encourage or discourage whistleblowers, create a hunger for truth and justice, or a care for soldiers abroad – but it will have an impact nevertheless.

References: The Guardian, The Economist, The Atlantic Wire, Sky News