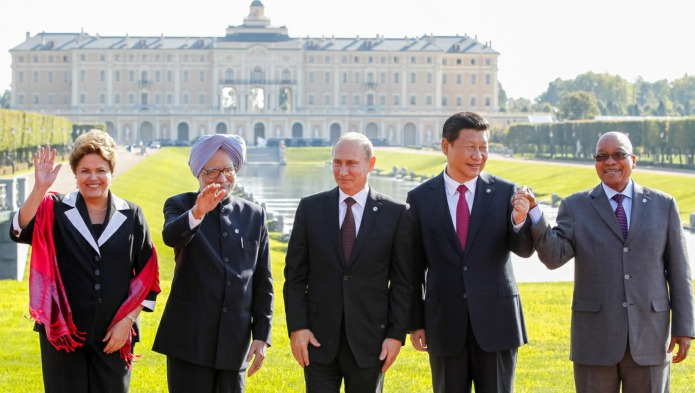 Significant economically and politically, the 5 BRICS nations – Brazil, Russia, India, China and South Africa – have decided to set up a $100bn reserve fund to fight possible financial crises. This comes on the back of India’s Rupee crisis and Russia’s fallout with the US over Syria and Snowden – and that is why it’s so significant. It marks a change of attitude from these 4 developing economies and Russia – they are looking for an alternative source of financial help than the IMF (International Monetary Fund – helps in financial disasters) and the West.

Although Indians only see bad RBI policies and incompetent Congress governance, the truth is that, in recent months, America’s tightening of its monetary policy has caused currency disasters in a multitude of nations – including India. Even though India has a great relationship with the IMF – this is an economic support system which it will be part of, having economic friends to rely on for currency help. It also shows that this is not just a response to the recent crises – it is part of a gradual move of emerging economies away from their dependence on the West and towards a dependence on each other.

According to current announcements, Brazil, Russia and India will contribute $18bn each, South Africa will contribute $5bn, and China will contribute a mammoth $41bn. For Brazil, India & South Africa, they now have a great source of support and help from a big economy like China and from each other. For Russia this is part of its drifting further from the West, as it extends the hand of political friendship and economic dependence to China instead. For China, it’s a part of their bid to make the Chinese Yuan a true competitor of the dollar – with many big economies now depending on it – and part of its economic rivalry with the US. The real significance is that the BRICS, which was just a group in name before, has finally done something as a financial cooperation – a new economic force has arrived.