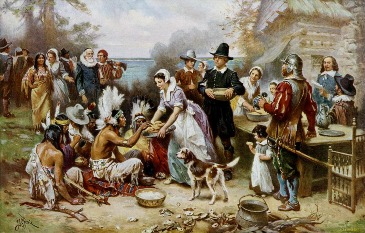 This week marked the holidays of Jewish Hannukah – a sort of Jewish version of Diwali and the American Thanksgiving – which is about family reunions and eating Turkey. Remarkably it was the first time in 125 years that both these holidays fell on the same day – November 28. This of course led to smart marketing types coming up with the word – Thanksgivukkah! And billing it as the greatest holiday ever and the “epic festival mashup”!. Amazingly, since we have computer to calculate the Jewish calendar (which is over 6000 years old and is one of the oldest calendar systems in the world – currently year 5775 is going on) we also know that the next time this will happen will be 70,000 years later. Wow!!

Funnily enough,an Israeli newspaper asked “why Thanksgivukkah and why not Chanksgiving? Hannukkah is the Jewish festival of lights and lasts for 8 days. It marks the day the temple in Jerusalem was liberated and rededicated in 165 BC after the Jews rebelled against the Seleucid Empire. Thanksgiving is always on the 4 Thursday of November (leading to a 4 day weekend and the family reunions over a Turkey dinner) and was started by Abraham Lincoln after the American Civil War as a day to “thank the lord for his beneficence”. The original thanksgiving holiday or feast was started by the early settlers of America (called the Pilgrims) who celebrated the successful harvest and the start of winter with feast. The first thanksgiving was celebrated in 1621 after the first successful harvest in New England at Plymouth. It also used to mark the day when settlers arrived in America after the arduous journey across the Atlantic in sailing ships in the 1600s.