Massacre in Cairo : The Battle For Egypt Begins 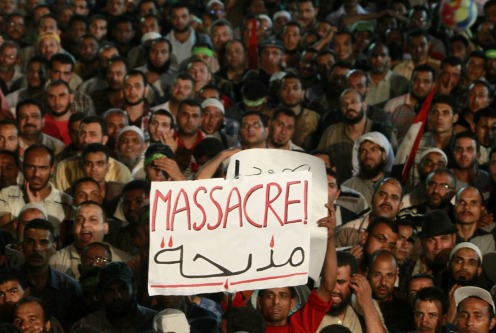 Whether the Muslim Brotherhood’s forceful removal from power (see Issue 7) was a people’s revolution or a military coup, there is no longer any doubt about its nature, and the future it has laid out for troubled Egypt. For, on Thursday, the military showed their true colours in a horrific massacre in Cairo that left almost 150 dead, according to reports, as similar clashes all along the Nile left between 500 and 1000 Egyptians dead in the last few days. Most of these were Muslim Brotherhood (the democratically elected Islamist party which was removed from power in July by the army & secular liberals, followed by the military arresting its members and banning it completely) supporters – protesting the military “coup de tat”, but many were general Egyptians – shocked when Egypt’s troublesome, ruthless army came back into power with popular support.

Was it a coup? – Yes, it was, but a popular coup, supported by Egypt’s moderates, secularists, democrats, and liberals, who felt that the Brotherhood’s unpopular Islamist policies were oppressing Egypt’s people. But they seemed to forget that this was the same army, police and judiciary that ruthlessly killed and oppressed Egypt under tyrannical dictator Hosni Mubarak, who have, for years, dealt in assassinations and coups, who should have been deposed along with the dictator – but survived as remnants of the old regime. And they turned their back on the supporters by declaring a state of emergency – it sounds like nothing – but was the weapon Mubarak used to keep control and absolute power for 30 years, and it is a depressing sign that the army will do the same. The resignation of Vice President Mohamed ElBaradei, one of the premier moderates of the army installed interim government, following the atrocities, shows decline of moderate support for the army – and little hope for democracy.

Some Brotherhood leaders have vowed peaceful retaliation, but already many have promised to take up arms to avenge the killings, and related Islamist factions have begun a full blown insurgency in North-East Egypt – a sign of the battle to come. The army’s stupidly brutal reaction continues to reduce its support, while increasing sympathy for the Brotherhood has divided Egypt straight down the middle. Just like Syria, the moderates are being choked in a worsening conflict between military dictators and violent Islamists.