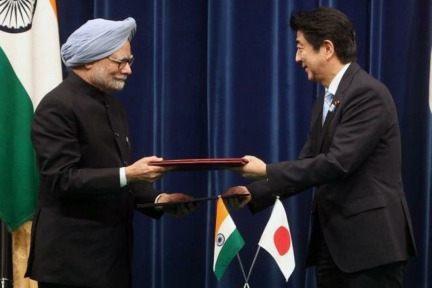 As China’s power grows and grows, perhaps India should stop looking over its shoulder at China, and bond with Japan, as The Economic Times puts it. Japan is the world’s third largest economy and Asia’s second largest, while India is Asia’s third largest economy, after China and Japan. Japan is willing to promote friendly relations between the 2 countries under its new Prime Minister Shinzo Abe, who has always emphasized on joint military exercises and strong economic relations.

The PM is bringing about a recovery in Japan’s economy and this is an ideal time for India to stop focusing on China, with whom it still has many disputes, and start making friends with Japan, not because of China – but other common needs – Japan can provide India with technology and innovation it desperately needs, both industrial and advanced, while India can help Japan through a trade deal & militarily with navy exercises. These 2 great Asian powers must forge the coming alliance to balance the power, but make it a genuine one, instead of an anti-China alliance.

References: The Economic Times, The WSJ