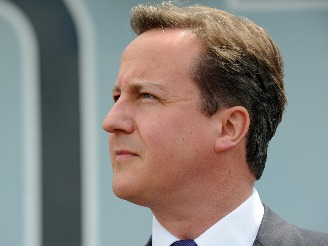 The absentminded Prime Minister of Britain is most famous for leaving his briefcase on a train, and leaving his daughter behind at a pub. David Cameron, the youngest British PM in the last 198 years is famous for more than just his careless and clumsy personal life – he is a modernist-Conservative!

A groundbreaker in British politics and a global leader who thinks very differently – he was elected in one of the most amazing elections in British political history. The Tories (Conservative Party) came back to power after 13 years of Labour Party governance, and as Jeffrey Archer amazingly predicted in his 1984 novel ‘First Among Equals’, Britain had its first ‘coalition’ (when multiple parties form the govt.) government since World War II. In these exciting circumstances Cameron came to power – and in spite of mixed reviews on his premiership – he hasn’t disappointed, excitement-wise. Just last week, he became the first global leader to visit Jaffna since Sri Lanka’s independence in 1948 – and came down hard on the Lankan govt., demanding answers on the end of the war.

He has broken the tradition of the UK’s foreign policy being a carbon copy of the US’ by refusing Obama’s proposal for military action in Syria – trying to prevent another Iraq type scenario. He has reformed the Conservative party and made them less conservative (!) – embracing gay rights, championing the minorities, and the first Tory PM on Facebook and Twitter. Even though he is from a very elitist background, he went to Eton and Oxford – he is still close to the common man – travels by metro and cycles to office – a man of such importance doing ordinary people things! Also like ordinary people, his bicycle has been stolen twice. And for the curious soccer fans, he supports Aston Villa football club.