Chess: All Hail The King 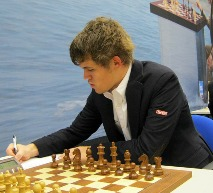 Sven Magnus Øen Carlsen was crowned the new World Champion on the 22nd of November after beating Viswanathan Anand ,the five time champion, 6.5 to 3.5 at the FIDE World Chess Championship 2013 Chennai. He has the highest world ranking as of December 2013 with a rating of 2872 which is the highest FIDE rating any player has ever had….there is a new King crowned!