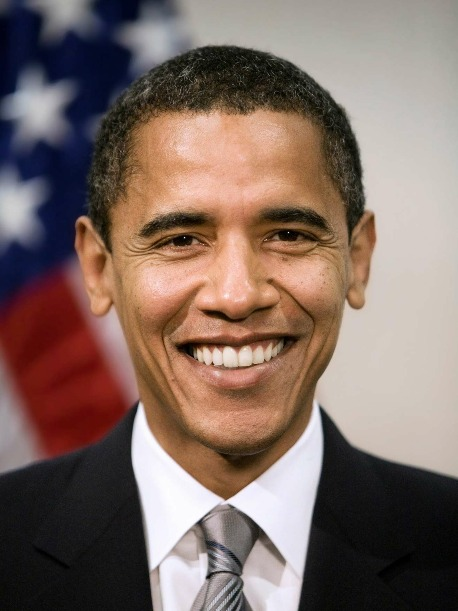 Barack Hussein Obama II (yes he is the second, his father was Barack Hussein Obama too) is the 44th President of the US and the first African American one. He just turned 52 (on 4th August) but he’s been President since 2009 – he became President when he was just 48. Before becoming a Senator and then President, Obama was a civil rights activist, attorney and Professor of Constitutional Law. He studied at Columbia University and Harvard Law School. He was re-elected in 2013 and is the first President since FDR (who was President during the Second World War – 70 years ago) to win over 50% of the public vote in both elections.

Obama inherited a real mess – both economic and geopolitical from George Bush. The biggest recession and economic crash since 1929 and 7 years of American war in Iraq and Afghanistan welcomed him. The record is that he has nursed America out of the depression (created jobs and brought down unemployment steadily for the last 4 years), ended both wars and brought American troops home. He has also reformed Healthcare and eliminated Osama bin Laden. Mainly Obama is criticized for being too soft, too slow, and trying to avoid confrontations. However he has always said that he believes in leadership by consensus and has achieved everything with broad bipartisan support. His leadership style, very different from Bush can best be summarized as “it’s better to do the right thing slowly than to do the wrong thing fast”. This is perhaps a better style for the socially networked politics of today than the “shoot first aim later” style of the 20th century and his predecessor. Much of Obama’s success can be put down to his very sharp and wise wife of 21 years, Michelle, the First Lady, who has been his advisor and confidante politically. She is also from Harvard Law School and they met working for the same law firm in Chicago in 1992.
We will wait and see what ‘arguably’ the most powerful man in the world does for the next 3 years of his Presidency. He may also need to learn golf since he will have finished his 8 years as President when he is only 55 years old. The US still has to elect a woman to the highest office, let’s see how long we have to wait for that to happen.