Balloon Powered Internet For Everyone 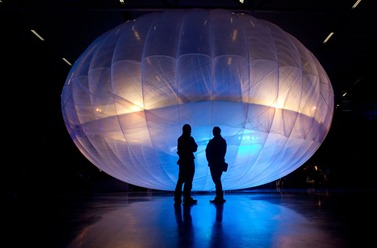 Yes it sounds crazy, but Google, who are at the moment booming with innovative technologies and ideas, announced last week ‘Project Loon’ – that aims to bring internet to all parts of the world. And although it sounds ridiculous, take a closer look, and you find that the project has been running for 18 months in complete secrecy, and has run some successful tests. Last week balloons launched in New Zealand provided internet to farmers for a little while – it actually works. Google have worked out all the little issues, and made it an almost feasible project. The gigantic balloons, 15m in diameter, will float at the edge of space, 20km up, far above aircraft height, and above the weather itself. They will run on solar energy, and have equipment that allows them to communicate with other balloons, along with users and providers on the ground, creating a little network. They will be steered by ground personnel using fixed air streams and currents in the stratosphere (For more on how they work – www.google.com/loon/how/). Each balloon will provide internet to an area on the ground twice the size of New York City, not much in global terms, but still making it much, much cheaper than cable. Still skeptical? Well, Google have already built and tested the balloons – and although its ambitious – it is an amazingly innovative and cost efficient idea. Only one-third of the world population has internet access – they want to change that. By the end of the year they aim to have at least 300 in the air, and although the entire world will require thousands, ‘Loon For All’ might just work.

References: www.google.com/loon/ and The Guardian