A New King on The Throne 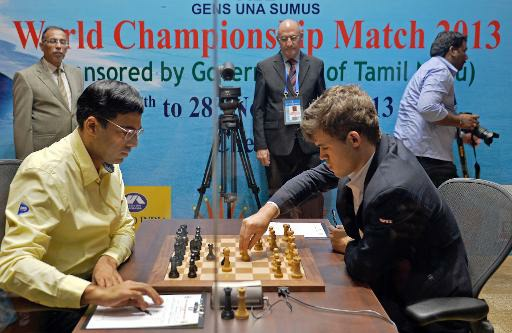 n Friday, the World Chess Championship match we reported about last week came to an end – and what an end it was. We have a new World Champion, and more than that, a new king of chess – the invincible, unassailable Vishwanathan Anand has finally been displaced from his throne by a 22yr old prodigy.

Norwegian wiz-kid Magnus Carlsen had impressed beyond measure, but no one really expected him to beat Vishy, the undisputed Chess Champion of the World since 2007, the World’s best at rapid chess, advanced chess and normal chess, and the World’s best player of the game. However, Carlsen shocked by not only beating, but soundly thrashing Anand in the 12-game challenge. After 4 draws, Carlsen beat Anand in the 5th & 6th games. Two more draws followed, before Carlsen all but sealed the deal with a win in Game 9. Vishy then needed to win 3 of 3 in the last 3 games to survive. The match on Friday was a draw – confirming Magnus’ victory with a score of 6.5 – 3.5 (0.5 pts for a draw, 1 pt for a win), or more simply – a net score of 3-0 for Carlsen.

Out of 10 games played, the king could not win even one – a truly huge victory. There can be no question now – with a win like this, Magnus Carlsen is the new face of chess – although Vishy indicated he’s not finished yet. My favourite part was the press conference after the match, where a reporter asked Anand if he would have chosen a better successor than Carlsen? Anand took his time, and then, very quietly, responded, “I didn’t choose him.”